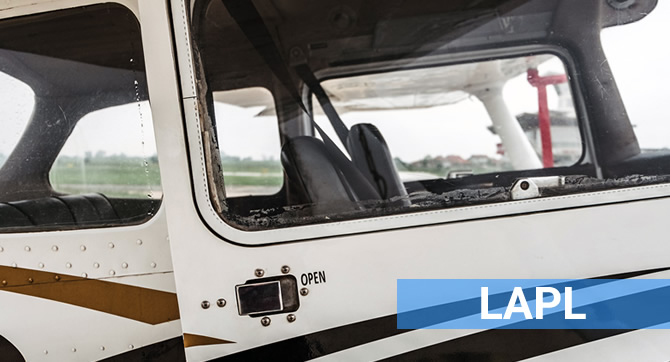 The LAPL (Light Aircraft Pilot Licence) enables the holder to act as the pilot in command of a single-engine piston light aircraft with a maximum take-off mass of 2,000kg or less, carrying a maximum of 3 passengers. A LAPL holder will fly non-commercial operations, and must not be paid for flying.

A Light Aircraft Pilot Licence will allow you to act as the Pilot In Command (PIC) on two different class types of aircraft, a Single-Engine Piston Aeroplane or a Touring Motor Glider (TMG) that has a Maximum Take-Off Mass of 2000kg or less. You will be allowed to carry a maximum of 3 passengers meaning no more than 4 people on board the aircraft at any one time.

You will initially be restricted to flying the class and variant of aircraft you pass your Skill Test in until you carry out further training to fly a different class. A different class may be an aircraft with a constant speed propeller or a retractable undercarriage, for example.

After passing your Skills Test and receiving your licence from the CAA, you will need to complete 10 hours of flight time as Pilot in Command before you will be able to carry passengers as per the above restriction.

Before applying you must have:

To extend your licence privildges to another class or variant you will need the following:

Different class (either SEP or TMG):

To extend the privileges of a LAPL to include more complex variants of the class of aircraft in which you took your skill test, you will need to complete differences or familiarisation training, which will then be entered into your log book and countersigned by the instructor.

The privilidges of your Light Aircraft Pilot Licence will only remain valid if you have completed the following in the last 24 months as Pilot In Command:

If you do not meet these requirements you will need to carry out ONE the following: