Over the next 20 years, as the global economy expands, industry experts predict that there will be an extraordinary demand for pilots, technicians and cabin crew, worldwide.

Last year, both Boeing and Airbus released their outlooks for the next 19 years, 2016-2035, and both reports indicate very similar demands, with the Far East and Asia being the big emerging markets, taking delivery of a predicted 14,300 aircraft out of an estimated global supply of around 38,000, that’s 38% and a mind-boggling market-cap of around $2.2 trillion.

With this predicted demand, Boeing suggests that an estimated 2 million aviation professionals will be required to operate the increasing number of aircraft. With this growing diversity of aviation personnel, instructors and trainers will need to have cross-cultural and cross-generational skills to engage tomorrow’s workforce.

As we have started to see recently, areas of the World that not so long ago recruited pilots from other continents, such as the big Middle-East Carriers and European pilots, have started to change their training and recruitment methods, to take more locally sourced pilots. Asia, over the next 20 years will undoubtedly lead the way with demand for pilots, requiring an estimated 280,000 pilots. Below you can see the 20 year forecast requirements, courtesy of Boeing:

Some interesting points to take from Boeing’s research is their expected reduction in Wide-Body jets, resulting in an increase in medium and regional aircraft, which may well have an influence on the increasing requirement for more pilots. Just taking a quick look at the above figures from Boeing, we can immediately see that they expect growth to continue especially in emerging markets, taking the total figure of 617,000, that comes in at just under 32,500 pilots, that’s approximately 620 pilots per week over the next 19 years that need to be trained globally to fulfil the growth.

Boeing also predicts that despite the ever improving reliability of modern aircraft and the increasing servicing intervals, the need for high-skilled technicians, engineers and mechanics will not be majorly affected, and their will still be high demand, just as we seen earlier with pilots. Figures are again provided by Boeing:

Here again it is the same story, an unprecedented requirement with Asia being the dominant continent.

Add to these figures an extra more UK problem; retirement. Due to a number of changes in 2006, retirement age for pilots was increased to 65 from 55 in British Airways, and 60 in other airlines. This means that for 5-10 years retirements have been far steadier than was previously the normal, now with these pilots catching up to the new retirement age, we can once again expect those numbers to regain some normality.

So you’re probably asking why so many young pilots are still trying to find that first job, or why airlines are reluctant to pay for pilot training in general. That’s a good question. We can already see that many of the Asian airlines, particularly in China are starting to offer very attractive salaries to European and American pilots who are willing to re-locate. Some of those airlines are offering staggering Captain salaries, in some cases a take home pay of just over £200,000 per year. Many analysts see this as the beginning of a shortage, as more experienced European pilots begin to emigrate to China and it’s neighbours, we will shortly be left with not only a shortage of qualified pilots, but potentially a huge experience in-balance. 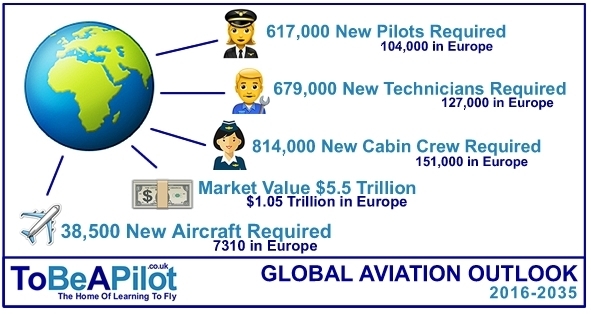 Emirates Airlines, last year announced plans to ensure they are not left struggling to crew aircraft, announcing a three and a half year training course to provide their own in-house pilots, taking on over 150 pilots per year initially to help with their 450 pilots per year requirement.

Some European airlines have already started to take small steps as well, UK based airline Jet2 is offering Pilot Apprenticeship Schemes, resulting in a bonded type-rating, Irish-based low cost airline Ryanair has very recently launched a new Airline Pilot Certificate course in which the airline pays for the pilots Multi-crew Co-operation Course, Jet Orientation and Type-Rating, the pilot is then bonded to the airline.

Bearing in mind that all the figures in this article are based on the next twenty years, we are only just at the very start of this huge shift in recruitment, we can’t expect to see instant changes in the way airlines recruit, however what can be said is that even if half of the predicted requirement is actually needed, there’s a very bright future for those looking to get in to aviation, especially if they’re willing to travel.

Data provided by Boeing and Airbus from their Long-Term Marker Outlooks.